TV’s reigned supreme at the 2019 Consumer Electronics Show in Las Vegas. Today’s AV consumers have witnessed a remarkable television evolution in their lifetimes. When furniture-cased models and their massive projection descendants gave way to flat screen technology, we marveled at displays that seemed like science fiction made real. TV manufacturers are still pushing the boundaries of what’s possible— with truly remarkable results. Curious? Read on to discover some of the jaw-dropping new TV technology unveiled in Las Vegas.

LG Is On a Roll

Want a TV that’s only there when you need it? LG’s Signature OLED R rises to the challenge— literally. Capitalizing on OLED’s inherent flexibility, OLED R rises from its sleek aluminum case with the touch of a button, spooling back into hiding when not in use. When its stunning display is retracted, OLED R capably serves as a Bluetooth sound system. With 4.2-channel Dolby Atmos audio, audiophiles won’t be disappointed! If you prefer state-of-the-art audio video with a minimalist aesthetic, start saving for OLED R’s arrival (late 2019).

8K TV’s made waves at CES 2019, but are they worth the investment? 8K refers to a television’s resolution— specifically, how many pixels its display contains. More pixels result in a clearer, more lifelike picture. For TV’s over 40-inches, 4K, with nearly 4,000 horizontal pixels, is now the industry standard. With 8,000 horizontal pixels, 8K is a whopping improvement on the industry standard. Up close, the pixels of an 8K display are virtually impossible to distinguish, resulting in a video that’s incomparably clear and bright. Read about Sony’s 8K technology.

LG, Samsung, Sony and others will bring 8K to US audio video consumers in 2019, but is it worth the investment? While 8K is a remarkable technical achievement, it’s important to remember that none of the programming we love (films, live sports, streaming content, etc.) is available in 8K yet, and this isn’t likely to change soon. Also, you’ll need a really big TV (think 80+ inches) to notice any real difference between 4K and 8K. So, unless you have one heck of a living room, it’s probably sensible to admire this technology from afar, at least for now. 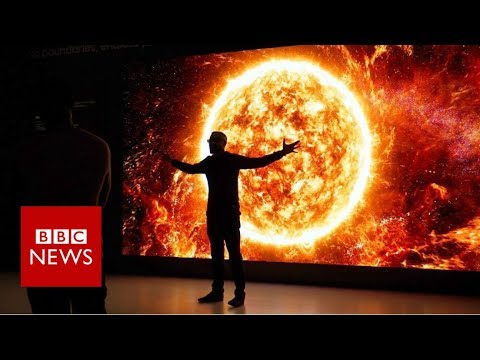 In Ray Bradbury’s iconic novel Fahrenheit 451, all homes are equipped with towering, floor-to-ceiling, wrap-around televisions. This technology must have seemed impossibly futuristic when the book was released in 1953, but Samsung’s enormous ‘The Wall’ TV is Bradbury’s prediction come true. The Wall is a modular, microLED TV. Composed of 6-by-6-inch panels just 30mm thick, The Wall can be adjusted to nearly any size or shape without sacrificing resolution, with seams so fine they’re imperceptible at viewing distance. Samsung’s set-up at CES was a staggering 219 inches, but the possibilities are endless. The manufacturer promises to bring MicroLED TV’s to home AV consumers later this year. Whether you need a single 75” screen or hundreds of modular panels to wrap your home theater in immersive sci-fi style, you should start saving. Samsung has yet to announce pricing.

Transparent OLED: A Window to the Imagination

OLED displays are known for color and contrast that can make the video seem like a window to the real world. Imagine, though, if an OLED TV could actually be a window. Enter LG’s new transparent OLED TV. LG already uses transparent technology in their InstaView refrigerators, in which digital touch screens act as family photo displays, shopping lists, and, with a quick tap, windows to a refrigerator’s contents. While consumer TV’s might be a year or more away, it’s hard not to fantasize about the possibilities. Hang it in front of a favorite painting, a fish tank, or even in front of an actual window— there’s nowhere LG’s transparent OLED TV can’t go!

How to Choose a Quality AV Company

Séura TVs for Indoors and Outside

Holiday Gifts for the Technophile in Your Life